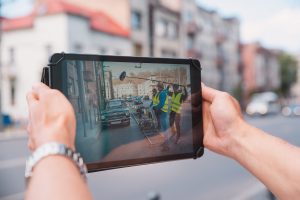 It is no secret that HBO’s Chernobyl was filmed mainly in Lithuania. You might even know that Kaunas was the show’s Moscow. But do you know which Kaunas locations were used and for what scenes? How the filming crew solved the issues of authenticity and what challenges they faced? What is the contribution of Kaunas University of Technology (KTU) scientists in this project? All these details and much more are to be found out in a unique tour of Chernobyl filming locations in Kaunas on July 7, 8 and 9.

The stories and unexpected historical details render the simplest environments magical. This will definitely happen to the visitors of Chernobyl filming locations tour. The abandoned corridors of the old radio factory will transform into jail, the empty rooms of a former KTU building in Kęstučio Street – into the Moscow Hospital No.6, and the historical art-deco flat – into the living environment of Legasov, the principal researcher of Chernobyl research group.

About 80 per cent of the popular HBO’s show was filmed in Lithuania. In order to avoid the discrepancies and mistakes, the American team was assisted by Lithuanian crew of more than 250 people. The filming in Kaunas took place in April, May and July 2018.

According to the guide of the Chernobyl tour, Linas Daubaras, the filmmakers have a system of evaluating film locations, how well they are suiting for one or other scene. There is one location in Kaunas, which got 10 out of 10 – it is an overpass, which portrayed the so-called Death Bridge from which the inhabitants of Pripet were looking at the fire in Chernobyl. In the scene, the radioactive ashes were landing as flower petals on the faces and hair and clothes of the unsuspecting observers.

“It’s not even a bridge, just an overpass over the railway for water pipes coming from Petrašiūnai Cemetery. The crew needed to make sure that the construction will keep all the actors and technicians, and the filming gear, therefore KTU scientists were calculating the endurance of the bridge. Artificial ashes were provided by one German company, and two huge locomotives were standing on the tracks in case someone was trying to pass”, explained the guide.

The tour will take up to 2 hours. It will be held in Lithuanian, take a native friend with you. In the future, tours in English are planned.

KTU established a €10,000 prize fund for students whose final projects focus on AI

KTU student from Germany: participating in ECIU classes is great

Are you from Europe? Don’t miss your chance to study at KTU for free

Spend weekend with the largest cinema event in Lithuania